By Rosemary Broadbent on April 9, 2015 in Housekeeping

Rosemary’s song cycle Beyond the touch of time will receive a further performance at the Art in Action Festival at Waterperry House and Gardens in Oxfordshire in July. The cycle, to words by William Wray, was written for the Lincoln Labyrinth Festival in 2014 and formed part of a Life Journey theme interpreted in the cathedral in words, music, drama, textiles, painting and embroidery.

The theme has now been adopted by many artists at the 2015 Art in Action Festival and will be used to inspire painting, ceramics, sculpture and textiles. The songs will be performed by Eleanor Garside (soprano) with the composer at the piano.  The performance will form part of a public presentation in which the artists who have worked on the theme compare notes and describe their experiences. The festival will also feature a contemplative trail through the gardens culminating in an open-air labyrinth, the feature which was at the centre of the Lincoln Festival. 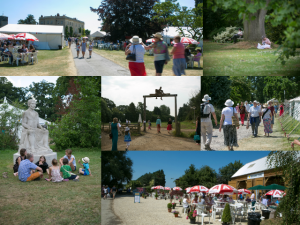