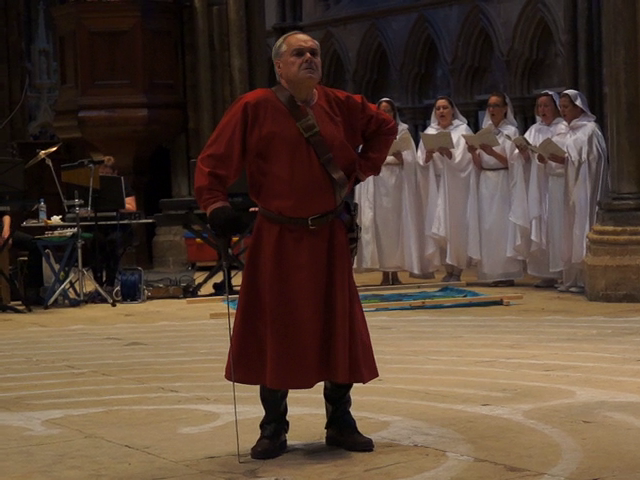 A new production of Rosemary’s ballad opera The Quest of the Holy Grail was performed in Lincoln Cathedral in August 2014, as part of the Lincoln Labyrinth Festival. The production was mounted by Lincoln County Amateur Operatic and Dramatic Society (CAODS) with musical direction by Jonty Nowell and stage direction by Andrew Wydrzinski.

The opera was  originally written for the pupils of the St. James Independent Schools in London, and performed in the Temple Church, London. The libretto was adapted from Malory’s Morte d’Arthur by William Wray, and it follows the inner and outer journey of four knights in search of the legendary Grail cup.

The two performances in Lincoln told the story in dialogue, songs and dance in the magical surroundings of the cathedral nave. The stage was the labyrinth pattern created on the cathedral floor especially for the Festival events. Performances were given in the round, ensuring that the audience were close to the action – but not too close to the sword-fighting. The music, described as fresh and evocative by one audience member, gave ample opportunity for the society’s soloists and ladies’ chorus and was supported by confident acting and splendid costumes. 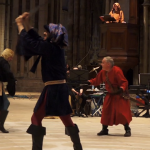 The battle for the life of the maiden 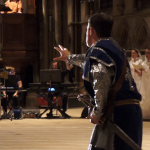 Sir Lancelot (Andrew Mitchell) is felled at the Grail chamber

Complete vocal scores of the opera are available from the composer, and a selection of songs suitable for concert performance by upper voices and piano will be prepared in the near future.